A Word from Leia the “Poop Monster”

My person called me a “poop monster” recently. The indignity, right?

See, last Friday night, my person and her person were having pizza. A corgi loves pizza. It’s food, isn’t it?

My silly person couldn’t finish all the pizza, and she left it there on the table. As if I didn’t know it was there. So what I did was, I jumped up and down like a kang-aroooo, and I kept doing that, and adding pathetic squeals, until my person said, “Okay, already. You can have a piece.”

So she took all the cheese off (how dare she!) and gave me some of the crust. It was so good that I kang-aroooed again, and she gave me some more. Before she knew it, she had gaved me almost all the pizza slice (except that my stupid brother got some, too).

I was so content that I curled up on her lap to take a nap until bedtime.

But before bedtime, my person woke me up and said, “Leia, you stink! Do you need to go out?”

Cold, dark, and snowy: the perfect time to play!

It was not the Time to Go Out, but I will never say no to a romp around the yard, so I went out with her. But she didn’t want to play. She crossed her arms like I was supposed to be doing my business. But my person knows I already did my business for the day. How dare she!

What do you mean “time to do my business”?

She stayed out so long until she finally said, “Okay, I’m freezing.” And then we went to bed.

The next day, she came down and saw that I had made a mess in my crate. She (how dare she) said she had to get rubber cleaning gloves because I “slept in it,” and she had to carry me outside. She then complained about how cold it was out, and how the hose wasn’t hooked up and that she’d have to carry me back inside for a b-b-bath! The nerve of her! And she didn’t even feed me, either. Instead, she cleaned me with some stinky shampoo.

The indignities of bath-time.

She even made me go to the vet when the poop wouldn’t stop coming. The vet said I didn’t have any parasites (of course I didn’t!) and that it just had to “run its course.” Whatever that means. I like to run, so whatever!

Here I am hiding at the vet’s office. I figure, if I hide behind this chair, that pesky vet won’t be able to find me.

Turns out, “run its course” has nothing to do with running. Instead, it means being crated for like 20 hours a day! What’s a gal supposed to do being crated so long? Even being let out every three hours… the nerve!

All I had to do while in that crate was stare at my brother. He had to be in his crate, too “because of me.” Here are two funny stories about him.

First: my person had to cut my “butt fluff” the other day. She said she was tired of me squealing when she had to wash my butt fluff in the sink. I tried to tell her she didn’t have to wash my butt fluff—she could just leave it. But she insisted. So she took me outside with scissors and cut a little bit at a time. I squealed each time those scary scissors sliced together. I don’t like the noise they make.

So here’s the stupid part. My dumb brother always has to copy me (because I’m so amazing). So as soon as my person finished cutting my butt fluff, Yoda came running over and presented his rump for cutting! Can you believe the stupidity of that dog? So my person just shook her head and said, “Yoda, you don’t need a haircut. You aren’t sick.” You’d think Yoda would trot away, but instead, he just howled at my person.

So what she said was, she was going to pretend to cut Yoda’s butt fluff so that he wouldn’t feel left out. But here’s what happened: she opened the scissors up, and they made that scary slicing sound, and Yoda got so scared—with the scissors like a foot away from his butt—that he ran across the yard squealing.

He’s such a scared-y dog, and a goody-two-paws, too. Here’s why. After I stopped being sick, my person was still skeptical of my “poop situation” (the indignity!). So when I barked at 5:15 in the morning, she came right down to let me out. I wasn’t sick or anything, and she gave me some petting and food and then said she was “going back to bed.”

She put these baby gates at the bottom of the stairs and told us to “stay.”

I stayed for a little bit. In the past, I barreled through the gate, and the noise woke my person, and then I got yelled at and crated.

The time after that, I moved the gate ever so slowly, so my person didn’t even notice. When she woke up, I was sleeping in the hallway just outside her bedroom. She didn’t even know! 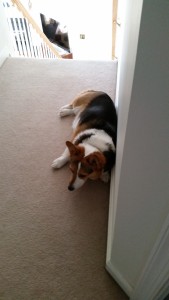 This time I was just as sneaky. Stealth-like, I moved the gate millimeter by millimeter until there was just enough of an opening for me to squeak by. I was being so quiet, not even jingling my collar. I made it to the upstairs hallway and then…

He loves to howl. He’s got about five hundred different kind of howls. There’s an excitement-howl, a fear-howl, a startled-howl, and greeting-howl, and worst of all, there’s a tattle-tale-howl. The tattle-tale-howl has been used time and time again to

Which is what he was trying to do. He tattle-howled me, and my person got up right away. Without even looking, she knew it was a tattle-tale-howl. She called, “Leia, what have you done this time?”

She was onto me. 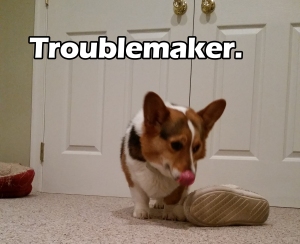 And there I was standing in the hallway. What could I do? I ran down the stairway, but it was too late. She saw that I was still on the wrong side of the baby gate. And so I was in trouble.

I thought for sure it was the crate for me, but things worked out okay in the end.

My person said I was “too cute for my own good,” and she said she would stay downstairs with us so we could cuddle with her on the couch.

And that’s just what we did.

Me. Her. And even my pesky brother.

The best kind of cuddling is cuddling that prevents our person from being productive!

From the warmth of the couch, this is Leia the Poop Monster, signing off!

Posted on March 3, 2015, in corgi, inspiration, photo. Bookmark the permalink. Leave a comment.