← The Heart of a Hero: Stormborn
Changing Seasons and Enjoying the Unknown →

I just happened upon a news story about a dog that was presumed dead for weeks–found safe and sound.

It’s a timely reminder about the importance of hope, even if a situation seems rife with despair.

In the nine months leading up to the birth of our daughter, we noticed that Yoda seemed drawn to my belly, and the baby seemed to love kicking him from inside. In fact, Yoda used to move his head from side to side on my stomach, and the baby’s kicks seemed to follow. 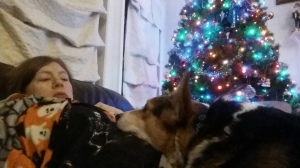 Yoda and the Unborn, playing a game of kick-the-corgi (excuse the look of exhaustion on my face!)

I thought he would be fast friends with the baby from the moment she came home. But that was not the case. After a traumatic few days leading up to his human sister’s birth, Yoda seemed terrified of the Six-Pound Terror.

At first, Yoda would barely stay in the same room as the baby. He preferred hiding in corners and darkness. 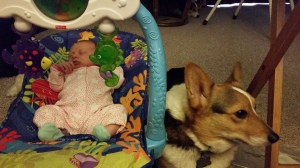 In a time that should be filled only with joy, I felt a little sad. Yoda, my favorite buddy, my best friend, was afraid to be in the same room with me. I didn’t think things would ever be the same with him, and I wondered if Yoda would ever be happy again. 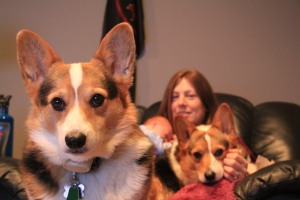 Yoda: “I won’t come any closer to the Terror.”

And it continued to be a sad situation. Literally, all the baby did for weeks was–sleep. How, I wondered, could that be so horribly terrifying to a dog five times her weight? I researched tips on how to introduce dog and baby, but nothing seemed to work. I wondered if I’d ever get my old Yoda back.

But as the weeks (yes, weeks) passed, he snuck closer and closer to the little “terror.” 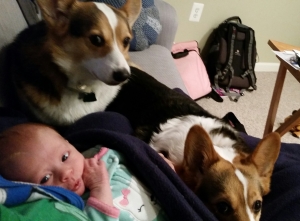 But as soon as her little baby arm would flail anywhere near him, Yoda scattered to the corners of the house. Until one day, when all hope seemed lost…

One of the smoke detectors upstairs had just started chirping, and I decided I would fix it later. I was tired from sleepless newborn baby nights and sad at Yoda’s lack of affection toward the baby (and, by extension, me, since baby was practically attached to me for those few weeks).

Of course, there’s no noise more frightening to my corgis than a chirping smoke detector. I have no idea why. The actual smoke alarm went off twice in our house, and the corgis didn’t react one bit. But the little chirping sends them into a frenzy. They tremble for hours afterward and hide in the basement or whatever dark corner they can find. And if they can find me, they hide on me, too.

So of course as I was sitting there with the baby, the two corgis come barreling down the stairs to find me on the couch in front of the fire. Leia took a leaping run to my right, sitting so she was touching my leg but not touching the baby. Yoda took a running leap to my left and soon found himself touching–dun, dun, dun!–the baby’s foot!

But the chirping smoke detector is exponentially more terrifying to the world’s scarediest fraidy-dog that he took no heed of the baby, instead drawing comfort from the physical contact. When the dogs settled down many moments later, Yoda realized he was touching the baby. I saw the realization come into his eyes, and I fully expected him to scatter.

But he didn’t. Instead, he sniffed the breath coming from the softly-sleeping child. Then he curled up, allowing his paw to touch her foot. I didn’t want to move or make a big deal out of it, lest the progress fall by the wayside.

But the next day, when the smoke detector was well fixed, I asked Yoda to “sit.” I wanted to hold the baby on him so that she’d be sitting on his fairy saddle. I would be right there in case anything happened, and maybe Yoda would take comfort in that. And, finally, an entire month into the baby’s existence, Yoda made his peace. 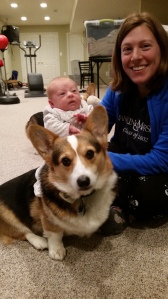 Now, one of his favorite things to do is a game called “get petting from the baby.” Yoda, the gentle “giant” (well, compared to a tiny baby, anyway), allows her to grab his ears, eyelid, fur, you name it… I think she may grow to be his new favorite person in the world. 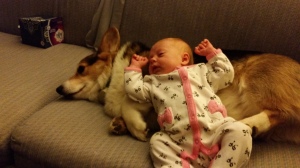 And as long as the two of them are happy, that’s a title I’m willing to give up–for the both of them. 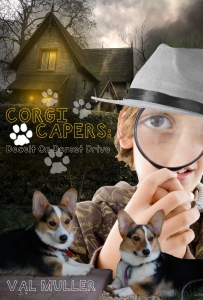 All three Corgi Capers books are now out for Kindle! They’re part of the Kindle lending library, so if you are subscriber, you can read them for free. If you’ve bought the paperbacks from Amazon, you’re also entitled to a free copy of the corresponding Kindle edition. Haven’t read them yet? They’re only $2.99 each and available here:

Corgi Capers: The Sorceress of Stoney Brook for Kindle

Authors love book reviews! If you review (or have reviewed) any of the Corgi Capers books, email me the link to your Amazon.com review, and I will send you a coupon code for a free Kindle version of the next book in the series!

Posted on March 18, 2016, in corgi, inspiration. Bookmark the permalink. 3 Comments.

← The Heart of a Hero: Stormborn
Changing Seasons and Enjoying the Unknown →