How Many Names Can You Name a Dog?

I’m excited to share this guest post by the amazing C. Hope Clark, author of the Carolina Slade Mystery series and owner of two adorable dogs. You can check out her links at the bottom of the post:

Writers often love having a pet around the keyboard. Dean Koontz has his golden retriever. Virginia Woolf had Pinka, a red cocker spaniel. Like my host Val Muller, Stephen King loves his corgis. John Steinbeck had a poodle he’d walk or drive around to remove writer’s block. And I’m proud to say that E. B. White, author of Charlotte’s Web and Stuart Little, adored his protégé Minnie the mini-dachshund, because I’m a dachshund lover, too.

While I don’t have quite the acclaim of E. B. White, I write day in and day out, publishing The Carolina Slade Mystery Series, mystery novels that take place in rural South Carolina. And at my feet, or running up and down the hall to my study, or wrestling around the floor, or chasing each other around the sofa, are two dachshunds that my readers know well thanks to Facebook.

Simple names. We acquired Roo first. As the last of a litter, she was a smooth, red sable, an inch or two shorter than a proper, well-bred dachshund should be, which only made us fall in love with her more. But I wanted a distinctive literary handle for her, so I researched high and low for characters and authors with cool names.

Suddenly I heard down the hall, “Stop jumping! This dog is a dang kangaroo.” Worried about her dachshund spine so prone to injury, my husband fought to keep her from leaping in his lap, on chairs, on the sofa, but she ignored his pleas. “I’m calling her Roo,” he declared. And since Roo was such a wonderful little character in Winnie the Pooh, I agreed.

Roo turned into her daddy’s pup, though, preferring his lap to my study, coming to me only in his absence, so we decided a year later on another pup for me, as well as for Roo. On the way home, the tiny brindle pup in my hands, we searched on our phones for a solid German name for her. Agnes, Mathilde, Gretchen, we read down the list. Then we came to Winifred. Cool and unusual. Wini for short. It wasn’t until days later that we realized we’d unconsciously pulled out another Winnie the Pooh name, and we changed her spelling to Winnie. And as if to compensate for Roo’s shorter body, Winnie decided to be looong and lean. 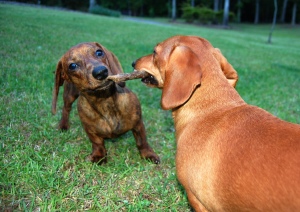 As children of the South, our family has a deep supply of stories, metaphors and nicknames. Winnie was small and low to the ground, and soon learned that she could out-maneuver the more rotund Roo by scurrying under chairs, couches and beds . . . like a rat.

Then as Winnie grew long, and Roo grew more round, they became Mini-Winnie and the Mighty Roo.

When they needed to go outside, they were called Winnie the Poo (husband’s idea, I assure you) or the Poo Puppies.

At dinner time they were the Gorgeous Guts.

When they misbehaved, they were the Nasty Pups.

Roo slipped up behind you at times, earning her the title Stealth Puppy. Winnie, on the other hand, was Crazy Puppy. She couldn’t be quiet if she tried.

When Roo became such a Daddy’s girl, and she tired some evenings of a new puppy’s gnawings on her ears, she became:

“The Sweetest Puppy in the World”

“The Smartest Puppy in the World”

“The Prettiest Puppy in the World”

“The Cutest Puppy in the World”

You get the idea. Winnie didn’t care. She was too busy being wild and carefree, wreaking havoc on the nearest shoe, sometimes piling shoes and slippers until she’d cleaned out the closet.

There are some days I wonder why an author is supposed to have a dog. It’s not like they politely pose at your feet, being quiet, helping the writer feel inspired. Instead they frolic, yap, scramble, rip and run, reminding us that we cannot live continuously at the computer. There’s a real life out there, and sometimes it takes a leash with a friend on the other end, and a day of sunshine to make a writer go outside, take a deep breath, walk and rejuvenate.

And that pup lets that author call her whatever name she wants. Because that dog knows that her main goal in life is to make her author healthy and happy, so that she can better tell her stories. 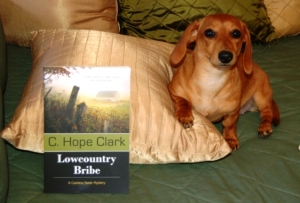 C. Hope Clark is author of the award-winning Carolina Slade Mystery Series. She is also editor of FundsforWriters.com, a website chosen by Writer’s Digest for its 101 Best Websites for Writers – a resource for career writers. She lives on the banks of Lake Murray in central South Carolina, with her husband and two doxies who love life. www.chopeclark.com

Posted on May 5, 2014, in inspiration. Bookmark the permalink. 4 Comments.