When Leia and Yoda were tiny puppies, they would share everything. 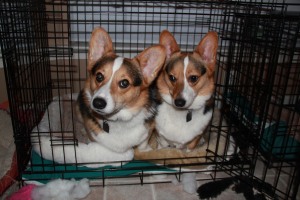 When we were little, we shared everything.

As Leia has grown up, however, she has become a territorial terror, bullying and bossing around her brother. Have you had similar experiences with your multiple-dog households?

For the past few years, Leia has been crying, squealing, and pacing around any time we took her for a coveted “ride in the car.” She doesn’t seem to be carsick, and we couldn’t figure out what was wrong with her. As a little puppy, she used to curl up and go right to sleep after about five minutes of “car motion.” I was trying to think about what may have changed.

And that’s when Leia’s growling started. 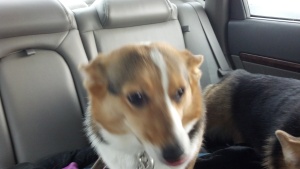 Leia in the back seat moving so fast, growing, and whining that she is a blur in the picture! Notice Yoda is next to her on the back seat. Leia’s ears are also in a fairly distressed position.

The epiphany came to me yesterday when I took the dogs with me to the gas station. Leia was doing her usual growing, whining, squealing, and running back and forth, when Yoda did something unprecedented. The passenger seat was empty this time (it’s usually not), and Yoda jumped into the passenger seat, sat down, and curled up.

When we got to the gas station, I told Yoda to go back into the back seat.

Posted on December 19, 2013, in inspiration. Bookmark the permalink. Leave a comment.