← What is this blog?
Corgi Construction! →

Leia: The Inspiration Behind Princess Sapphie

In Corgi Capers, Princess Sapphie is Courtney’s little puppy. Like Courtney, Princess Sapphie’s personality is a difficult one. Sapphie is capricious and sometimes self-centered, and she doesn’t always think about the consequences of her actions. The inspiration is my little corgi, Leia.

Leia has been a challenge ever since we brought her home. Of our two corgis, Leia was the first to learn words. She quickly learned the word for “pee,” and whenever we would say it, she would pee on command—right on the rug!

Leia is fearless: when she first arrived at our house, she ran all over investigating her new home. She ran up the steps of our townhome—until she realized that though she could run up the stairs, she was still too tiny to get back down! When visitors arrive in our house, she is quick to approach them, and she would probably jump in the car with just about anyone. Leia’s mischievous blend of intelligence and curiosity has gotten her into some sticky situations. She quickly learned to knock over and open plastic bakery containers. She has, in the course of her three years here, eaten a pound of donuts (in one sitting); a half-pound of the donuts we bought to replace the ones she ate (I guess we didn’t learn); and over a dozen chocolate chip cookie (in one sitting while we were sleeping!). Even though her stomach regretted these indulgences the day after, she continually sneaks around checking out what there is to eat while we’re not watching. 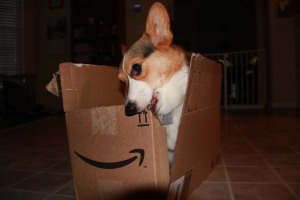 Her personality is such that she gets easily excited. When my sister visited, we were sitting on the couch watching TV, and Leia was so excited to have a visitor overnight that she jumped on my sister’s lap and wagged her tail so hard that her whole body wiggled from side to side. She vocalizes her excitement in a mixture of a growl and a howl, which she continued to do while on my sister’s lap. It took her nearly twenty minutes to finally settle down. And it doesn’t stop there. On walks, she gets excited when she sees other dogs. She gets excited when she sees other people. She gets excited at shadows or butterflies or leaves blowing in the breeze. And every time she gets excited, she bites her leash so vigorously that it is now in shreds. And it is not the first leash I have bought her. 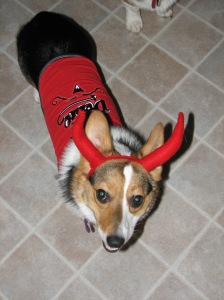 Her excitement is not limited to walks. Among her many loves: water. She loves baths. She will sometimes run up to the bathtub and sit on the bathmat, waiting for me to wash her. She loves splashing around: once when a pipe burst in the basement, Leia had a great time splashing around on the saturated carpet. She also loves drinking water, but she does so by plopping her front paw (or paws, depending on how hot it is) into the water… so that when she is done drinking, she leaves little wet pawprints all over the house. She loves chewing on cardboard: an empty shoebox will keep her entertained for hours (as long as we keep an eye on her–otherwise, she’ll eat the cardboard!) She also loves to play with empty bags of dog food. One day when I couldn’t find her, I ran all over the house and even checked the back yard. It turned out that she was hiding–she was sleeping inside the empty bag of dog food!

In the novel Corgi Capers, there is only one person with the power to control the rambunctious Princess Sapphie: Courtney. Courtney’s unique personality gives her the ability to understand Sapphie, and Sapphie behaves for Courtney like she behaves for no one else. It’s the same story with Leia. When we first picked out our corgis, Leia was running around in the pen with her fellow puppies. When I reached down to pet her, she gave me no mind. Instead, she wrestled with her brothers. But when my husband Eric bent down to pet her, she practically leapt into his arms. She’s only ever still when Eric picks her up. At night when she can’t settle down on the couch, she has only to jump onto Eric’s lap, and she’ll curl into a peaceful sleep. 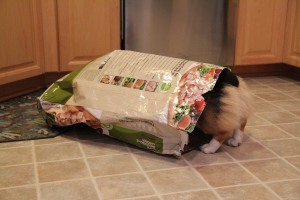 Leia is a sweet and cute dog with a peculiar personality. She’s so endearing that it’s difficult to stay mad at her, especially when she rounds off her ears. I’ve tried to capture all the qualities of her personality in the corgi Princess Sapphie, making her appearance soon in Corgi Capers.

← What is this blog?
Corgi Construction! →