← Meet Sapphie
What’s So Good About “Being Good”? →

I’m sharing pictures of some of the characters from Corgi Capers: Deceit on Dorset Drive. These pictures were created by the fabulous Marji Cooper. Along with each picture, I’ll introduce a bit more about each character. If you enjoy these characters, be sure to check out the free short story (posted earlier in this blog) or the novel, available in print or e-book format.

My name is Zeph. I’m a Pembroke Welsh Corgi, and above all I’m a good boy.

I was the third dog to be born in our litter, and my sister was the fourth. When I found out all of us puppies were going to new homes, my father pulled me aside. He told me my sister was a rambunctious bundle of trouble, and he asked me if I would watch over her. I made sure we got adopted together, and I’ve been keeping track of her ever since. One time she found a stack of newspapers. She tried to climb it, but she ended up pulling it on top of her instead. Luckily, I was able to sniff her out in time, but watching over Sapphie is a full-time job. 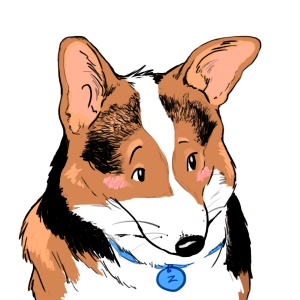 Right now she’s sleeping in my rocketship bed, something that my Person, Adam, gave to me. But Sapphie likes it better than the one she has, so I let her sleep in it from time to time. It’s what a good brother would do. Besides, if I didn’t, she would just tackle me and bite my ears until I gave up.

Aside from keeping Sapphie out of trouble, my main concern is watching over my Person. His name is Adam, and he’s a good kid. He also has sister issues—his sister is almost as much of a pawful as Sapphie. My favorite thing to do is curl up at Adam’s feet as he reads something called a “comic book.” I’m named after Adam’s favorite comic book hero, outer-space Captain Logan Zephyr. But when I’m not curled up at Adam’s feet, I also like watching him play baseball—though I’m afraid of the ball… and the yelling crowd… and the strange noise made by a scary thing called an “ice cream truck”… there are some scary things out there in the world.

My other interest is language. There’s absolutely nothing scary about language, so it’s my favorite hobby. Ever since I was a puppy, I have been learning as many words as possible. They come in handy when I’m trying to figure out what Adam and his family are saying. My sister isn’t as good at language, so I have to explain things to her. All the time.

I hear Sapphie trying to sneak into the basement, so I’d better stop her before she finds trouble.

Thanks for stopping by!

← Meet Sapphie
What’s So Good About “Being Good”? →